Apple & Google: Get Along!

Setup
This blog post about Apple and Google not getting along when it comes to the iPad and Google Apps for Education comes from my being inspired by the "This Week in Google" podcast episode #120 with Leo LaPorte, Jeff Jarvis and Gina Trapani.  While writing what's below, I also stumbled on my friend Scott Meech's open letter to Apple & Google which is very similar to what I'm writing about and I wholeheartedly agree with his thoughts.

Caveats
I am not going to pretend I have any kind of insider knowledge for how the companies of Apple and Google work.  I am part of the Google Certified Teacher network and also an Apple Distinguished Educator and I'm very proud of both accomplishments. I get to network with some fantastic people that are doing some really great things in education, but I have no inside scoop on anything.  The following thoughts come purely from my own use of Apple and Google products/services and reading or listening to some online content that is really disheartening.  I'm not out to upset anyone. I'm just trying to change the world.


History
There's no love lost between Apple and Google.  I'm currently reading the Steve Jobs biography.  Admittedly, I'm not even halfway through it yet, but everyone is talking about it.  I've listened to some podcast reviews where others have shared some of the stories about how Steve Jobs had offered Google some valuable retail space on the iPhone home screen in exchange for Google not pursuing their own touch enabled software in the form of Android.  We know now that Google did not accept that offer.  I share all this so people don't think I'm naive in saying, "Why can't they just get along?"  I get there is a lot of competition between these two companies and that competition drives the marketplace.

My philosophy when using technology has always been, "the right tool for the job."  If I'm moving around the building to help a teacher, that tool will probably be my smartphone, an Android based HTC Evo.  I can quickly add something to my to do list, snap a picture or shoot off an email.  If I'm going to a meeting, it might be my iPad or laptop so I can take notes.  Lately, it has been more likely that I will grab my laptop instead of my iPad and we're getting to why that is.

iPads?  Chromebooks?  MacBooks?  Netbooks?  Wind--- nevermind.  I find myself constantly feeling like a hypocrite when I talk to others about which device would be "best" for the classroom.  The iPad is very versatile in that the camera has many uses.  The Apps are pretty much unlimited.  The ability to AirPlay when connected to an AppleTV in the classroom makes the iPad super attractive in terms of being a great teaching device.  Hands down, this is a great device for the classroom.

Chromebooks from Google are also a viable classroom device, especially for those districts that have gone with Google Apps for Education.  Any student can log in to any Chromebook and access all of the content that is contained in his/her Google account.  The services just work and help to take out a lot of logistics (saving to a flash drive, having to email files home, saving on one computer in the school) that make for lost time. 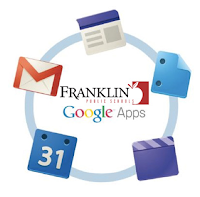 Educational Service
Google Apps for Education has really taken off.  Many school district are "going Google" where students and staff are able to have a Google account that will let them access all the great features that fall under the Google umbrella.  Apple doesn't have anything that's even remotely close to this.  Apple has the iWork suite, but the functionality and flexibility provided by Google Docs far outweighs the current versions of iWork.  I say versions, because you would think you could take a Pages file from the Mac and "iCloud" it to your iOS device, but you can't.  I'm sure Apple is working to make this happen, but it's not there yet.  Currently, Google Apps for Educations offers a lot for educational institutions and the cost is great for school districts (free). 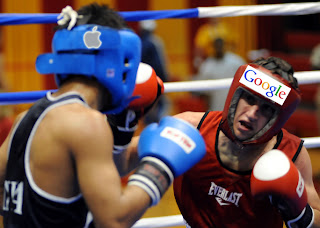 source
The Problem
So, here in lies the problem.  Google Apps for Education doesn't work well in the Safari browser on the iPad or iPod touch.  Google Documents and Spreadsheets "kind of" work, but it's not a manageable solution.  Recent speculation also suggests that Apple is doing what it can to "divorce" itself from Google.  Apple reportedly bought a "map" company with speculation being that they are trying to get Google's mapping services off iOS devices.  The "divorce" article linked above also states that Apple might use Bing as search results for Siri, the iPhone 4S voice assistant.  Siri-ously? source
The Plea
As an educator, it is very frustrating to see two companies that both offer great products for education to be so far away from making something beautiful.  If Google Apps for Education worked on the Safari iOS browser like it does on the desktop, then both parties would be in an #eduwin situation.  Google's services would be utilized by students that would grow up and hopefully seek out Google Apps for Business as a viable solution for their companies.  Those same future entrepreneurs would see how versatile the Apple products are and no doubt continue to purchase them.

I heard or read somewhere that both companies say it is the other's "fault" that Google Apps won't work on the iPad.  I would hope that two companies that claim to put education at such a high standard could work together to find a way for these two products/services to work together.  Both have nothing to lose and everything to gain.

So, in closing ... Please, Apple and Google, find a way to make some beautiful magic for the educational arena by allowing Google Apps for Education to work seamlessly on the iOS platform like it does on the desktop computer.  Both of you will come out winners.  Do it for the children.

Home
My Blog
About Me
Presentations
FranklinTech